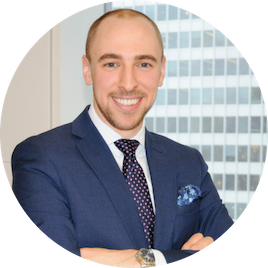 On Novembre 30, the Order proudly announced that 1,195 candidates from Quebec had passed the 2018 Common Final Examination (CFE). One of them, Michael V. Richardson, did especially well, earning the highest standing in Quebec.

Allow us to introduce this promising future CPA, who has a brilliant career ahead of him.

his reaction upon learning his score

"Congratulations! You passed the CFE and made the NAtional honour roll." When he read that message on the exam results webpage, Michael was stunned and at first thought there may have been a mistake. Then his phone rang. The caller ID showed "Ordre des CPA du Québec". He answered with repidation, only to be bowled over by the good news: "Congratulations! You won the gold medal!"

Michael was only 5 when he first started showing signs of business and financial acumen: he opned a shop in his bedroom closet.

Michael started out in Marketing at Concordia University (JMSB), but the call of numbers was felt as he attended his first accounting class. He soon changed directions and he was the first person in his family to get a university degree. To expand his horizons, he signed up for the GCPA program at McGill University: "Not two companies have the same issues. It's important to have more than one perspective because it helps you to be versatile."

his message to future CPAs

“In your workplace, take part in discussions and ask questions. You have a place at the table. You can participate in the decision-making process.”

For the immediate future, Michael says ruefully that he hopes to survive the busy season, which is already well underway. He sees himself working for KPMG for several more years and plans to do a Master’s in data analytics: “90% of the data available today have been built in the last 2 years. In that kind of environment, it’s crucial to stay relevant and current.”
* Information valid at the time of interview
Top of page