Several years ago, governments introduced the small business deduction (SBD) to foster SME development. Since then, the SBD has undergone a number of modifications, but due to proposed amendments at the federal and provincial levels, many changes are ahead in 2017.

This article provides a summary of the changes to the SBD that will take effect in 2017.

First, note that the previously announced SBD reduction, which was to occur from 2017 to 2019, has been rescinded. The federal small business tax rate will remain at 10.5% after 2016.

Second, for taxation years beginning after March 21, 2016, the ability to multiply access to the SBD will be denied in the following situations:

In these 2 cases, the income earned will not be eligible for the SBD, except if the partnership member (in the first case) or the other private corporation (in the second case) assigns a portion of its SBD limit to the corporation.

Let us consider how the new rules affect the following structures: 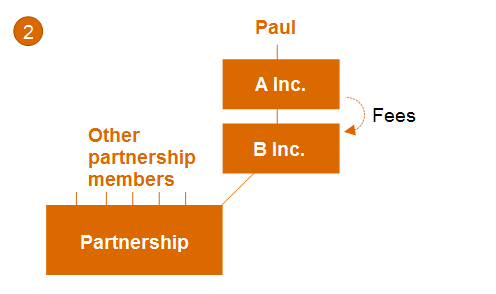 In both situations, the fees that Corporation B earns from Corporation A will fall under the new rules. That is why it will be important to assess eligibility for the SBD when fees come from partnerships or entities where shareholders do not deal at arm’s length with the corporation.